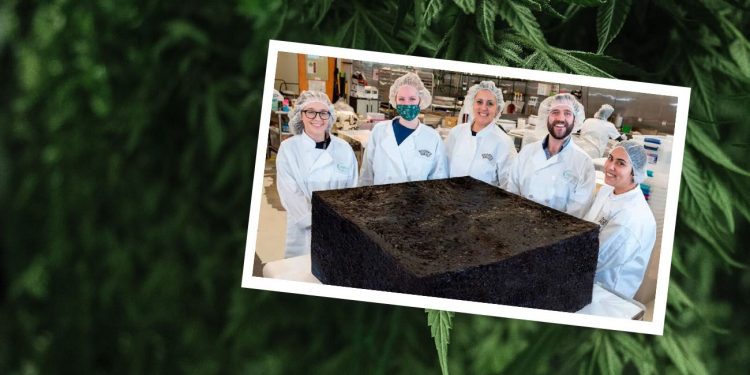 MariMed, Inc, a cannabis company with cannabis licences in six US states, has baked a cannabis brownie that weighs over 385 kilograms.

The brownie is the work of a team of six employees working at MariMed’s cannabis processing and cultivating facility in New Bedford (in Massachusetts). It took the team several weeks to design and build the brownie, which they unveiled for National Brownie Day on Wednesday, December 8th.

The brownie is quite the sight. It’s three feet wide, three feet long, and 15 inches tall. It weighs in at 850 pounds (or roughly 385 kilograms) and contains 20,000 mg of THC. To put the sheer quantity of THC in this brownie into perspective, keep in mind that the brownie contains 4,500 mg more THC than what all of Australia consume on average every day (roughly 15,500 mg of THC).

While MariMed’s chief product officer Ryan Crandall didn’t share the brownie’s recipe, he did tell TurnTo10 that the brownie’s creators went through quite a lot trying to bake the thing.

We ultimately scaled that brownie to a place where we really couldn’t fit a bigger brownie in the oven…. it took literally a lot of ingenuity to get it in and out of the oven, which was not easy.

MariMed also described its brownie as the “World’s Largest Cannabis Brownie” on Instagram.

MariMed created the brownie as both a team-building exercise and a promotion for its new Buddy’s Baked Brand edible. These brownies are significantly smaller, with just 5 mg of THC each.

The company hasn’t decided the fate of the ginormous brownie, as it’s too large for even MariMed’s 276 employees to eat. Crandall says MariMed has considered dividing the brownies into medical servings, but this is only an idea. The company would need to ensure it meets state regulations if it wanted to sell pieces of the World’s Largest Cannabis Brownie.

MariMed is one of the US’ larger cannabis operators, as the company brought in $US51 million (roughly $AU71 million) in revenue in 2020.