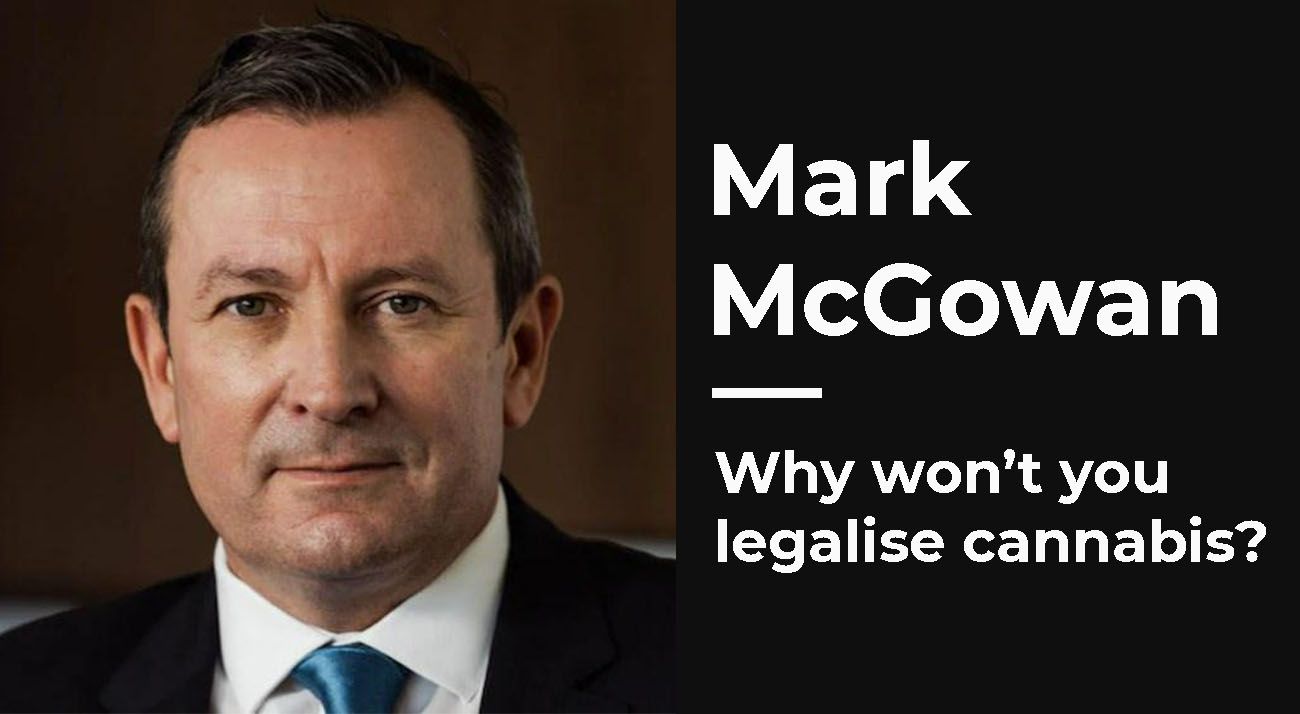 Mark McGowan has been the Western Australian Labor Premier since 2017, and with the landside win in the 2021 election, it’s likely he’ll remain Premier until 2025. So we ask you, Mark – why won’t you legalise cannabis?

Western Australia outlawed cannabis in 1950 – 26 years after the ACT first put it into prohibition, and the second last state to do so, behind Tasmania in 1959.

It’s unclear exactly why WA made cannabis illegal in the first place. A text on the Parliament’s website reads:

When Victoria banned cannabis in 1927, critics even mentioned “records show that authorities could not see any particular reason to ban the drug.”

History aside, we ask you to look to the present Mark. And the present shows that despite the federal and state governments in power showing no signs of legalising cannabis, the majority of Australians now support the move.

In an interview with Perth 96FM back in 2019, a caller asked you whether you’d be willing to let the people choose on recreational cannabis in the form of a referendum during the next election. You were was blunt with your reply:

Probably not, in fact, not.

You also added that it’s the Parliament’s job to pass the laws on these issues and that the current WA Parliament has the position that it is an offence and you don’t plan to change that. But why not?

Despite your current Parliament’s position, quite a few of your members have openly admitted to partaking in the drug:

That last name on the list stands out, as Sue Ellery recently made a speech in Parliament calling cannabis “dangerous and addictive“. It’s obviously not so dangerous or addictive if all those people above who previously used it went on to become members of your Parliament.

Thousands, tens of thousands, actually, make that hundreds of thousands of WA residents have used cannabis in the past 12 months – with the vast majority of them obtaining the drug via the black market. All that money, likely billions of dollars a year, is going straight into the hands of both local and international criminal organisations. Not only do they use these Australian dollars to fund other areas of their criminal networks, but they also show little care for their consumers, often using toxic chemicals during the growth period to increase harvests and profits.

Moving back to your interview with 96FM, you concluded with:

We’ve got a position, and we won’t be changing that.

Unfortunately, you failed to explain why.

With all the new evidence coming forth on the benefits of cannabis, how unharmful the drug is, and the potential tax revenue WA could gain by legalising it – why won’t you change your views? Are you at least open to a civil discussion on the topic?

The rest of the world is legalising cannabis, and with Australia’s Federal government clearly stating they’re not going to get involved, it’s up to you, Mark, to get the ball rolling in WA.

Hopefully, that’ll be sooner than later, with the Legalise Cannabis WA Party having two of its member sworn in after winning seats in the 2021 election.

Mark, if you’d like to have a read on why we, and many other Australians, think cannabis should be legalised for recreational use, you can do so here.