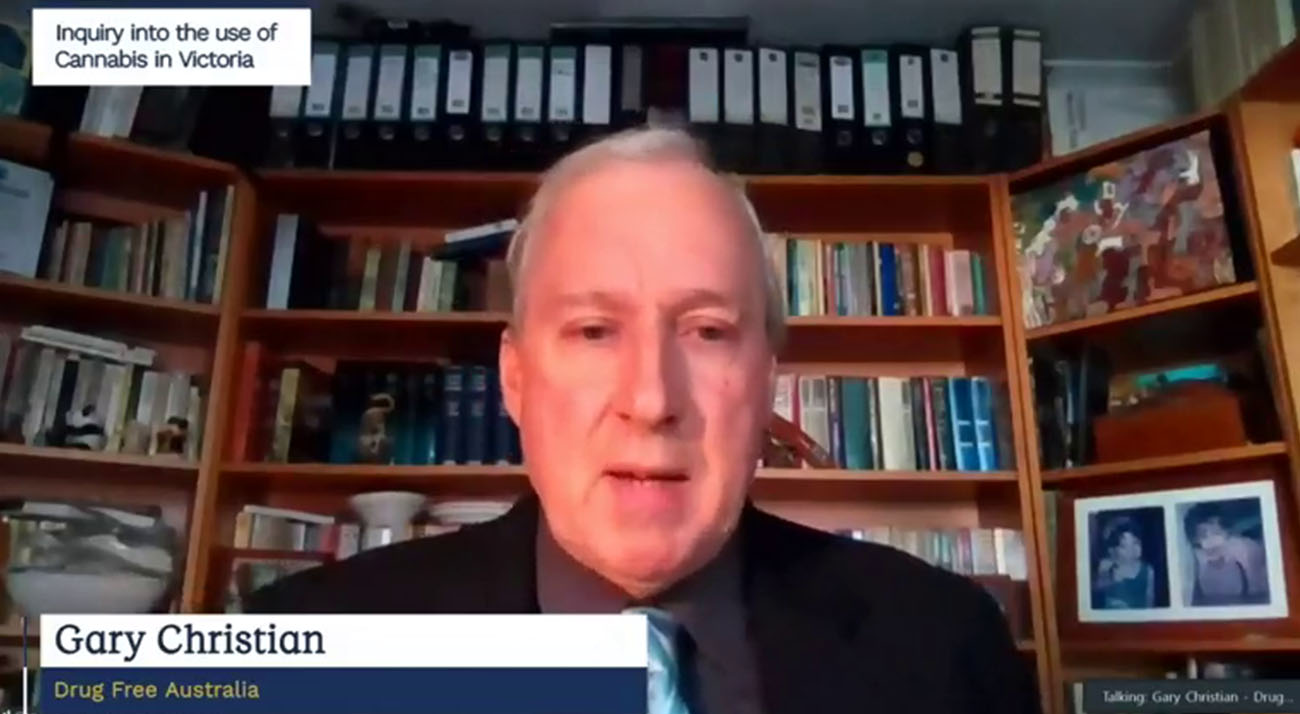 The state of Victoria in Australia has formed a committee to look into the use of cannabis throughout the state. Part of their duties is to accept written submissions from the public, conduct their own research, and listen to submissions made during public hearings.

Research Director of Drug Free Australia Gary Christian was one of the seven submissions heard by the committee during the hearing on May 19th. And he couldn’t have provided a better example of the cannabis fear-mongering which has plagued the past century if he tried.

Unironically, he starts off just like many teachers learning new technology did back in the day – having difficulties getting his Powerpoint to start. He quickly apologised and went on to present his first slide.

We’re not going to waste our time rebutting any of those points as he failed to provide any sources (however he has in other slides).

But really, potential cannabis harms include violence and aggression which escalate into homicide? It’s unlikely any rational person in this world thinks of cannabis this way. Except for Gary Christian of course.

A lot of the violence and aggression actually turns into homicide. This is a world-wide known phenomenon about cannabis. They kill the people that are closest to them.

To Gary Christian – if you can provide one documented source where cannabis use, and only cannabis use, has directly caused someone to murder one of their friends or family, we’ll shut down this website and join your cause – helping Australia become drug free (including alcohol, coffee, pain killers, opioids, and tobacco).

Drivers are 16 times more likely to hit obstacles – this one has to make you chuckle at least a little bit. Again, no source, and no explanation as to where the figure has come from. The only “driving issues” with cannabis in Australia at the moment are the rubbish regulations.

He goes on to say that “some people think that they can use cannabis to alleviate autism…it is a major cause of autism”. You have no source Gary Christian, but we do. Here’s a real study, lead by real people, in a real environment, showcasing just how beneficial cannabis is in treating autism.

Here are the two studies (one and two) linked to pediatric cancers and birth defects. Both check out and we agree that children or pregnant women should not use cannabis. But is keeping cannabis in prohibition, and doing the same thing over and over whilst expecting a different result, the right way to go about it? Maybe if we legalised, and bring some real education to the Australian public instead of just making everyone scared of it, we’d have better results.

While the data looks legit, we were, unfortunately, unable to find the source. However, we were able to dig into the largest drug survey in Australia – the National Household Drug Survey. This survey is conducted by the Australian Institute of Health and Welfare and is the largest of its kind in Australia. In total, 22,274 Australians aged 14 and over completed the latest survey questionnaire in 2019.

And for the first time in its reporting history, the survey revealed that in 2019 more Australians supported legalising recreational cannabis than not.

Gary Christian then goes on to present a range of different graphs, including ones showing that with cannabis legalisation traffic deaths increase, hospitalisations related to cannabis use increases, and the percent of suicides in which cannabis was present increases.

If you didn’t know, Australia’s capital, the ACT has had legal cannabis for over a year now. Although you can’t sell or buy it anywhere, residents are permitted to grow their own at home. There was no increase in hospitalisations relating to cannabis.

We check his source for the suicides, and unsurprisingly, couldn’t find anything backing his numbers. Sure, his source confirms cannabis is more commonly found in suicides in Colorado after legalisation, from 13.5% in 2011-2015, to 20.4% in 2014-2018. What he failed to mention, is that no where in his source does it say that cannabis use was a factor leading to the suicide.

There was a bit more to his presentation, but we’ll let you take a look at it yourself if you like (video below).

Let’s dive into the Q&A.

David Limbrick, a committee member, put forward the question that if we are against removing cannabis from prohibition, and alcohol causes more harm than cannabis, why aren’t we arguing for alcohol prohibition?

I don’t think it has lower harm than alcohol by any specks…I think it does more harm.

In 2017, alcohol directly killed 1,366 Australians, killed another 2,820 Australians where it was listed as a contributory cause of death, and was responsible for 40% of all liver cancer. Cannabis was directly related to zero deaths, and responsible for no recorded cancers.

One other point Gary Christian made was that those who support legalisation put forward the point that it will remove the large criminal networks currently operating in Australia’s cannabis black market. He mentions a LA Times article from 2019 which shows that the black market has done little to dissipate in the three years since legalisation.

Do you really think a multi-billion black market is going to vanish overnight Gary Christian? Of course it’s going to take time. But wouldn’t your rather start the process of moving it to a legal market now, rather than continue to fund these criminal organisations?

In his final words, he even throws in a little mention of a potential lawsuit on the Australian governments if cannabis was legalised.

I think if you were to come back and say let’s legalise, let’s decriminalise, whatever….I think that could open up some…exposures. I think it’d be very unwise to go that track.

When questioned by Committee Chair Fiona Patten of the Reason Party on the peculiar use of the word ‘exposures’, Gary Christian replied “legal, legal exposure”. Patten came back mentioning they’d “choose their words wisely then”, followed with a shrugging-off laugh.

If you’d like to watch the full public submission made by Gary Christian on behalf of Drug Free Australia, you can do so here.

Thankfully for Australia and its supporters of legalisation, Gary Christian isn’t the only person making a submission to the committee. And there are plenty supporting various types of drug law reform.

See here for a full list of submissions made during public hearings.