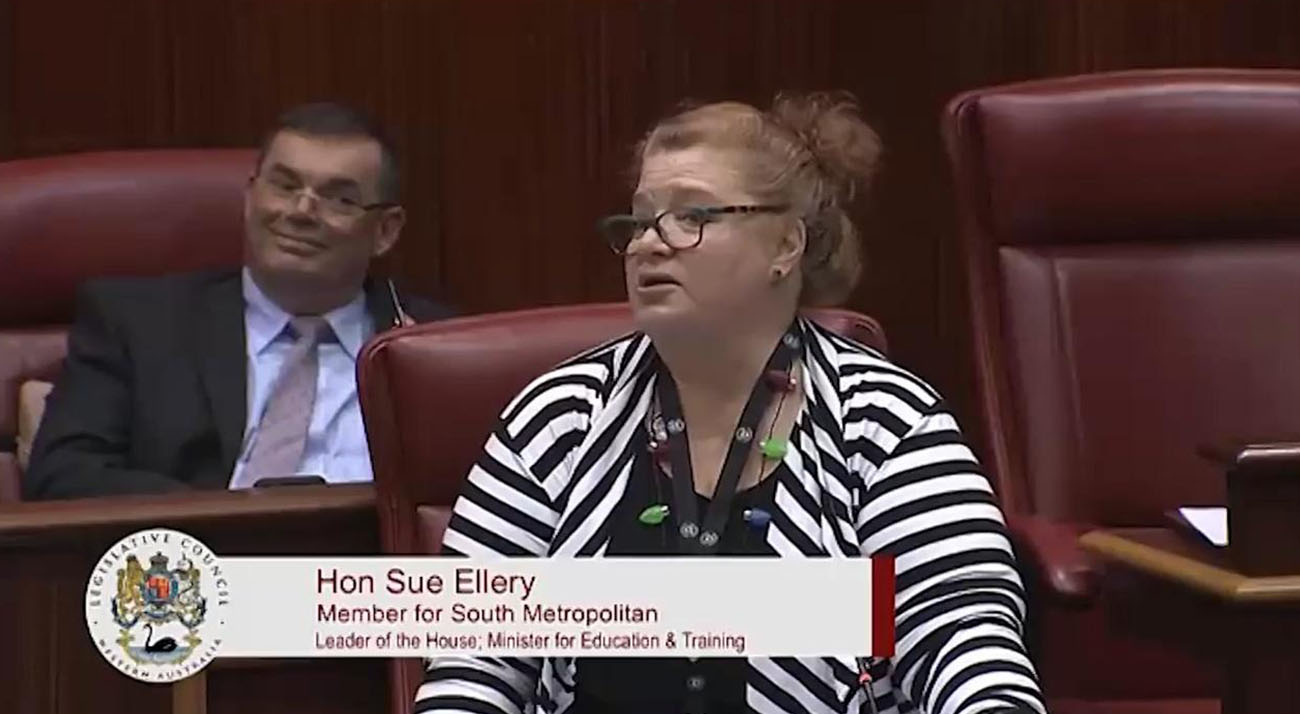 Western Australia’s Minister for Education & Training Sue Ellery made a speech in parliament this year, stating the the Labor government “is not contemplating” the legalisation of recreational cannabis use in the state.

Stumbling across her words, Ellery began by mentioning that despite the fact the health and social consequences of cannabis use are far less than other drugs, like alcohol, their party has no intentions of even decriminalisation.

The research is increasing that does show…uhh…the…ummmm….ahhhh…[cannabis] use is dangerous and addictive.

She failed to mention any sources of the research.

Recreational cannibal cannabis use has been comprehensively studied and the detrimental health effects are well documented. It does cause dependence, and in young people this is especially high.

Again, no mention of any factual research or studies to back her points. We’ve got one – teenage cannabis addiction rates dropped by nearly 50% in the US over the past decade, with the highest drops occurring in the states which have legalised recreational cannabis – as reported by the US government themselves.

If it was legalised, there would be significant ongoing public health costs, which would need to be balanced against any economic or social benefits.

How about the link between cannabis use and the reduction in alcohol consumption? Maybe we could save some of the 3,000+ Australians dying every year directly due to alcohol? And the 70,000+ who get sent to the hospital each year from alcohol-related injuries?

Economic benefits? Let’s talk about where we could put the $1.1 billion the Australian government currently spends on policing cannabis. What about the potential $2 billion in tax revenues we could generate? And the potential thousands of local jobs created in the coming years?

Ellery then enters the classic stage of fear-mongering, common amongst those stuck in their beliefs and too afraid to change their own point of view, by reading of a bullet point list of “undesirable health effects when used recreationally that includes..”

Yep – she joked about wanting one of the effects of cannabis during a speech supporting its prohibition.

We don’t who you are man sitting behind Ellery, but we agree with your sentiment.

Ellery went on to mention that adolescents are at a higher risk when it comes to using cannabis. And it’s true – developing bodies should be left to develop in an as-natural-as-possible habitat and environment.

There’s already research that demonstrates that teenagers, adolescent brains, are still developing. I mean this with no disrespect, but boys, in particular, there is evidence that suggests that their brains are continuing to develop into late adolescence. I make no comment about adult men’s brains.

Ellery concluded with that cannabis “is a harmful drug, it does have a social and economic cost, it is linked in increasing problems in mental health, and for those reasons the government will not be supporting the motion.”

Let us ask you a few questions Ms. Ellery:

Why has this person been given a platform to speak on cannabis law reform when she ever so clearly has not done her research?

Here’s the full video of her speech for your viewing:

Much thanks to Doug C. on Facebook for sharing the story with us.