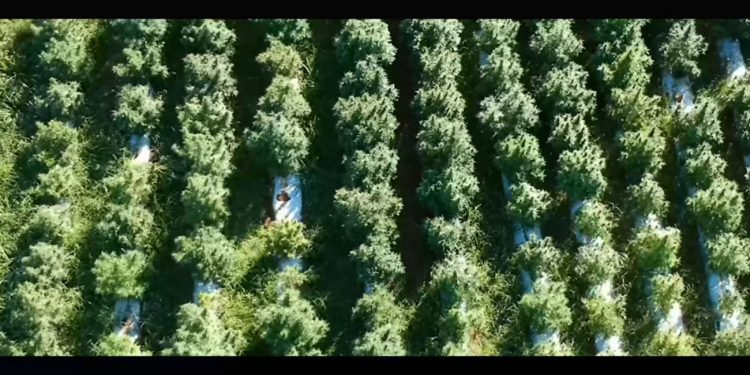 Aerial view of a hemp farm

An Australian-owned sustainable fashion brand known as Afends has announced plans to set up a hemp farm in Byron Bay (in Northern New South Wales).

Afends owners Jonathan ‘Jono’ Salfield and Declan Wise recently announced that Afends has purchased a 40-hectare farm in Sleepy Hollow. The land used to be a part of Pottsville Golf club and will now host a hemp farm, a coffee farm and several small vegetable farms.

Both Salfield and Wise have strong ties to the Byron Bay area, as Wise was born there and grew up nearby in Nimbin while Salfield moved to the area when he was a toddler. They first started Afends fifteen years ago in Ewingsale (near Byron Bay). Hemp has been a staple of their brand for some time, as over 60% of their products contain hemp fibre.

They’ve been working towards starting their own hemp farm for two years and have now made this dream a reality.

Afends’ new hemp farm will produce its first hemp crop in the coming months, as they expect to have the seeds in the ground in October. As hemp flowers quickly, they should have it in their 1000 square metre harvesting shed in early 2022. After harvest, Afends’ hemp will travel to China to become board shorts, shirts and jeans (among other items). The hemp will be farmed by Hemp Fields Australia, who partnered with Afends to run the farm.

Afends is jumping into hemp farming slowly and will only plant a single hectare of hemp this year. While the crop may seem small, it will have a significant yield of approximately one tonne, according to Salfield.

You get about one tonne of fibre for clothing out of a hectare, but the T-shirts we make have about 60g of hemp in them.

Afends is among many brands embracing hemp fibre in clothing. Hemp is becoming an increasingly popular cotton alternative, as it’s light, breathable and mould-resistant. Companies like Afends are also growing hemp pesticide-free, so it can be a reasonably sustainable crop.

If you’d like to learn more about Afends new hemp farm, watch their video below. It’s always great to see an Aussie company doing good work.