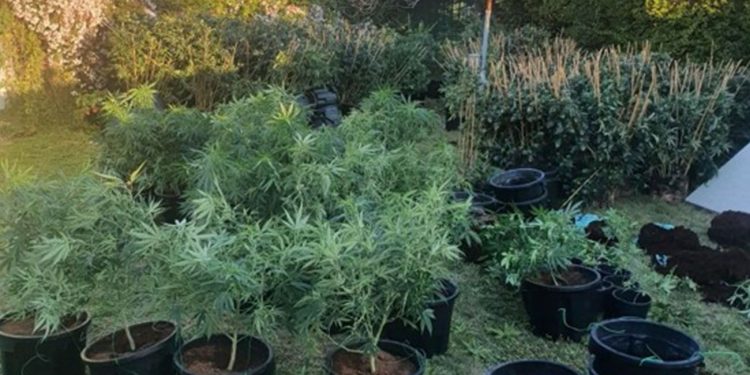 Cannabis growing in an Australian backyard

Police in New South Wales and South Australia were busy on Wednesday, September 8th, as officers in both states uncovered major cannabis operations in the span of a few hours.

Police in NSW targeted the Hunter Valley region for their investigation (a historically popular place for growing cannabis). Specifically, they executed a search warrant at a property on Cessnock Road in Abermain. At the property, officers discovered a “sophisticated indoor hydroponic set-up” and seized 157 cannabis plants.

They arrested four men – aged 23, 24, 27, and 34. Police took the men back to the Cessnock Police Station and charged them with the indoor cultivation of cannabis in a commercial amount. They also slapped the men with a $5,000 fine for breaching NSW’s COVID-19 Public Health Order. The men were denied bail when they faced Cessnock Local Court on Thursday.

After carrying out the Abermain rain over lunch, officers headed to a nearby property in Wollombi Road in Cessnock. Again, they found a “sophisticated set-up” and seized a further 148 cannabis plants.

The discovery of both cultivation operations dates back to investigations police started in July 2021. Between the Abermain and Cessnock seizures, police seized an estimated $1.5 million in cannabis.

Officers in South Australia were also busy on Wednesday.

In the evening, they carried out a search warrant at a property at George Street in Wingfield. There, they discovered “an extensive hydroponic cannabis grow facility”. The facility included three industrial cool rooms that housed 16 cannabis plants. Police also found 6 kilograms of dried cannabis (worth roughly $60,000). Police learned about this grow house from a tip sent to Crime Stoppers.

The next day (September 9th), police arrested a 47-year-old man connected to the grow house. They charged him with trafficking and cultivation of cannabis and the possession of prescribed equipment.

While both NSW and South Australia police yielded impressive hauls from the grow houses, they are only three of the many grow houses that litter Australia.