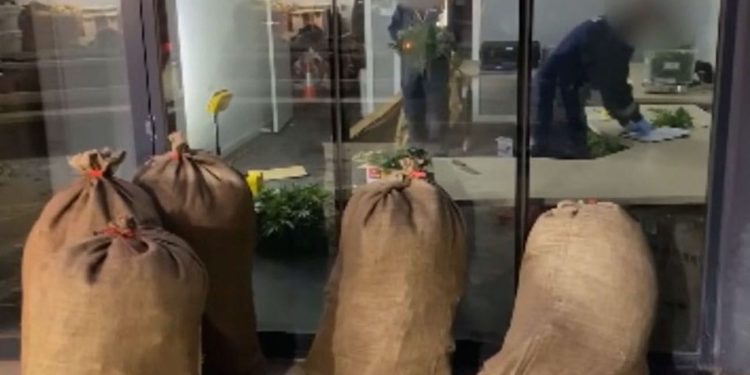 Bags of cannabis seized in Australia

Detectives from the Eastern Crime Squad executed a search warrant on the property on Wednesday afternoon (October 6th). The property is located on Eucumbene Drive in Ravenhall, and police believe it was being used to grow cannabis for “some time.”

Although police are still investigating the cannabis operation, they have arrested a man they say is connected to it. The 42-year-old was arrested a few hours before the raid on Douglas Street in St Albans (a suburb about 20 minutes from Ravenhall).

His arrest was quite dramatic, as police followed him as he left the grow house at about 11 am. Then, when they tried to intercept him, the man rammed two police cars before police could remove him from his car. A police dog then bit him — but his injuries are not life-threatening. The 42-year-old is currently undergoing treatment in hospital, where police guards are watching over him carefully. Police did not elaborate on what they have charged the man with.

In a release from Victoria Police, Eastern Region Crime Advisor Acting Inspector Scott Dwyer described the Ravenhall haul as a “significant seizure of cannabis plants.” He also reaffirmed the police’s commitment to fighting the war on cannabis (even if it isn’t going well, apparently).

Police will continue to have an ongoing focus targeting street level drug dealing and possession to create a hostile environment for drug traffickers to operate.

As we don’t know the weight of the cannabis or how large the plants were, it’s difficult to say how much the police’s haul was worth. However, footage from 9News shows that the Ravenhall grow house setup was likely quite extensive.